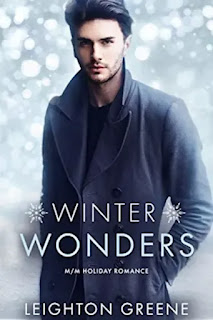 Faking their way through Christmas...

This holiday season, Cooper Kincaid finds his perfect Christmas gift on the side of the road: Jonathan Ashe. So perfect, in fact, that he can't resist unwrapping the gorgeous present and playing with him a little early, after taking Jon back to his cabin to recover from a minor car accident.

Jon seems to bring out something deep inside Cooper...something he's tried to keep hidden from previous boyfriends. But their merrymaking is complicated when Cooper lies to his meddling mother, and tells her he's dating Jon.

Still, maybe a fake relationship could be fun, just for the holidays?

But Cooper has made up his mind: it's his Christmas mission to heal Jon's heart. He's determined to work out exactly what Jon wants, and give it to him.

Meanwhile, Cooper's disapproving mother not only invites his ex to their Christmas Eve event, she digs into Jon's past to prove to Cooper that they're totally unsuited.

Can Cooper and Jon admit that they might be each other's winter wonderful, or will their differences and outside interference prove too much?


Winter Wonders is a standalone holiday romance novel with humor, just a dash of angst, and west-coast cool versus east-coast class. HFN/HEA guaranteed, and no cliffhangers.

Winter Wonders by author Leighton Greene is a sweet holiday romance. I like that it is told in dual POV as well.

Jon from LA is a Makeup artist. Has come to east to house sit.  And then everything went sideways. His car breaks down. His phone dies and he almost freezes to death in his car.  His ex-boyfriend was caught cheating on him with a guy who was way younger than Jon but looked like him.  Lucky for him he is saved by the sexy Dr. Cooper.

Cooper is wealthy but tired of being used. He was just dumped by a guy his mother had hooked him up with. He wants some alone time to get his head on straight. What he gets is the sassy, sweet, and tad naive Jon.

I think Jon is perfect for Cooper, Jon brings life and color back into his boring life. Cooper brings stability and loves back to Jon’s life.

This is a great holiday story that made me smile I am really glad I got the chance to read it.