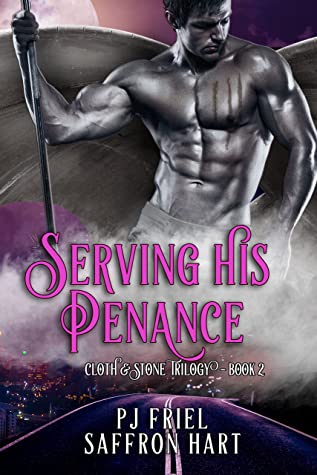 Can their relationship survive the journey to redemption or will their penance be the end of their love?

Deep in their fight to protect the people of Cleveland from Dane Stevens' criminal empire, Cordero and Gideon are convinced their cause is just.

Until Cordero sees the human cost of their crusade—a failed bust that nearly kills the target and a young girl whose life has been thrown into chaos.

Gideon sees Cordero's change of heart as a threat, not just to their relationship, but to the chance at redemption for his own past.

As the fight against Stevens turns into an all-out war, Gideon and Cordero find themselves on opposite sides, and their fledgling love gets caught between what is right and what is just.

Serving His Penance is the second book in the Cloth and Stone Trilogy by authors PJ Friel and Saffron Hart.  This is not a standalone title. This story picks up where book one left off.   This story is told in dual POV.

Out of the two books, I have read thus far this one is not my favorite.  I did like how there is more world-building that is good. Just the rest of it was not my cuppa tea.

Too much angsty almost whining from our resident gargoyle. I just felt he was in his own way in this book.

Gideon has to grow a ton in this story. He also needs to realize that not everything is about him. He came off as self-centered to me for not taking Cordero’s feelings into consideration.

I do hope the next story in this series makes these two come together in a way I can get behind. This story is happy for now ending, and I do want to see what happens next.