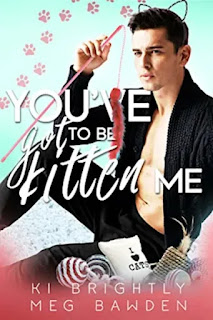 Title:  You’ve Got to Be Kitten Me

Brad Widstrom’s human puppy left him. To keep his mind off his loneliness, he drills all his extra time into coaching his kickball team. After a game one night, he goes to a pet-play party. He doesn’t expect to meet someone who makes his blood sizzle. The thing is, the man he wants isn’t a puppy, he’s a cat. Brad doesn’t know the first thing about them. One thing is certain, though, and that’s how much he wants Harley.

Harley Silvain is used to being ignored. Owners prefer the friendlier pet—dogs, not cats—and Harley is anything but sociable. There’s something pleasing about having an owner take care of him, but he’s not sure about this new man, Brad. Harley keeps waiting for Brad to decide he’s too much work. He’s sure he’ll be replaced by a mutt.

When Brad’s friend asks him to take in a pup who has been abused by his owner, Harley hates the idea. It’s one step closer to Brad dropping him, and he’s not willing to let a canine in the house. No matter how many times Brad reassures Harley he’d never leave him for a dog, Harley doesn’t believe it. If they want to make this relationship work, Brad will need to help Harley past his insecurities, or it’ll implode before it even begins.

You’ve Got to be Kitten Me by Meg Bawden and Ki Brightley is an okay read. I had a few issues with this title which I will explain here in this review.  This story is written in dual POV which is good because we really do need both perspectives to get this story.

Harley is a aloof, picky guy who is into cat play.

I get the kitty play; I was really looking forward to seeing that played out in a story. Usually I see a lot of dog play, so I wanted to see how being a Kitty is different.

However, I felt some points were hammered home so hard that I disliked Harley.  He is insecure so insecure it is off-putting.  I was sad about that, I wanted to like him.  He starts off great!  Then well you get where I am going.   I think Harley has potential it just was not reaching in this story.

Brad, I loved him. Perfect!!  He is a kind caring Master. He made me smile and cheer for him.  Big heart and gentle hands.

Overall, I cannot get behind this particular story. The “problem” they had to overcome was just drawn out too much. I think they needed to work on a different angle there.

Would I pick up titles from these authors again? Yes, there is potential in this book, and I feel it can be reached perhaps in another story.