Connor's Fight by AM Raulerson 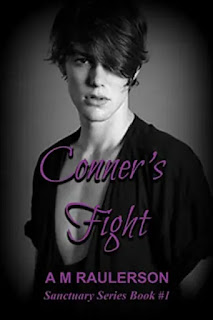 Blaming himself for the death of his submissive, dark and brooding Darien Black, owner of the private BDSM club called Sanctuary, swore he would never have D/s relationship again. He didn’t trust himself to be the Dom a sub needed for more than a play session or two at the club, no matter what his best friend Xavier or anyone else said. He had subs at his club to scene with, meddling friends to talk to every night, a tattoo and leather shop to run during the day and that was more than enough for him. When he meets Conner, Darien was drawn to him in a way he hasn’t been for a very long time, but he refuses to believe he should ever be trusted to care for a sub for longer than a scene, especially one who’s gone through as much as Conner. When the two of them can’t stay away from each other, Darien agrees to be “friends with benefits,” as long as Conner accepts it can never be more. Unable to stay away, Darien pushes his worries to the back of his mind, telling himself that it’s nothing more than two consenting adults meeting each other’s sexual needs.

Justin’s House, a homeless shelter for LGBTQ street kids and rentboys, saved Conner’s life. If it hadn’t been for Simon, Justin, and Aaron… he most likely would have become just another statistic. He never understood why, after a vicious john had assaulted Conner at club Darkfall, Simon had come after him that night and handed him a business card. With a sharp tongue and a sarcastic attitude, Conner hadn’t exactly been polite to anyone who’d stepped in to save him. Terrified, he did what he always did and hid his fear behind snarky comebacks and anger.

Traumatized by his life as a rentboy and a past that haunts him, Conner knows he’s too jaded to ever be more than a willing sub to play with at the club. He feels the spark between Darien and himself, but the two of them are in complete agreement that their kink buddy relationship has an end date, and that’s exactly what Conner wants.

The former rentboy, now working to try and save other rentboys and homeless kids off the same streets he used to work. And the club owner who’s misplaced guilt caused him to shut his heart away and concentrate on protecting every sub that walks through his club’s doors. Two men with heartbreaking pasts, who refuse to believe they deserve happiness. Can they open their eyes and see how much they need each other, or will their stubbornness prove too much

Connor’s Fight is the first book in the Sanctuary series by author A M  Raulerson. I liked this start to the series.  It is written in dual pov. I liked that too allowed me into the minds of both men and really helped me get into this story.

Darien is a club owner.  Blames himself for the death of his sub.  Runs a tattoo and leather shop as well. I loved him. He is strong yet vulnerable, sweet yet knows when to turn on the Dominate in him.  I loved him.

Connor runs a homeless shelter for the LGBTQ kids at risk. Like he once was.  He had been a rentboy and now he devotes his life to changing that for other kids.

This is a really well-done story. I liked how each man balances out the other. Both are strong in their own way.  I felt they were perfect for each other.  I loved this story and cannot wait for more from this series in the future.

Thank you so much for your review. I love my characters, live them as I write each story. These men pulled at my heartstrings and the heat and emotions between the two of them made me want them to have their happily ever after...with a lot of kink in their future of course. Thanks again for your review. I love to hear people like my books.