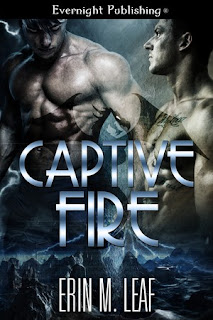 Prince Ryuu hates his father, Emperor Midian. When he’s forced to buy a slave, he defiantly chooses Drakon instead of a woman. Because he’s determined to overthrow his father’s empire, he can’t afford to show vulnerability, but Drakon is more compelling than he’d anticipated. For an Arethuza warrior, affection is a weakness that can lead to death.

Drakon isn’t really a slave—he’s a black dragon, considered cursed by everyone. Despite his people’s distrust, he will do anything to keep them safe, even submit to an Arethuza prince. He never expected to find love, and that complication could ruin his plans to sabotage the emperor’s war campaign. Though Ryuu is his fated mate, their fledgling bond is a secret too dangerous for Drakon to reveal.

Will their duty tear them apart? Can honor prevail in a war that might be too violent for even the strongest dragon warrior?

I really enjoyed reading Captive Fire by Erin M. Leaf.  The characters were vibrant and the story very different from any dragon shifter story I have read so far.  I like how this is a well rounded story and feels very finished.  It could even be a series there are characters that could be spun off too.  Prince Ryuu is living under the  thumb of his vicious and horrible father. His father demands he take a slave.  Ryuu does even though he deplores slavery.  It is not the slave his father wanted for him. He picks a man. One who is off in the corner but calls to his soul.  Ryuu, is kind hearted. He has a clear set of morals despite his father and he is brave. He risks his life many times in this story for what he believes in.

Drakon might look like a slave but he is anything but one.  He needs the prince to choose him so he can complete his mission.  But once he gets to know the prince and what he is like, maybe joining together is the way to go and defeat the king once and for all.  I liked his sense of honor. He knows what he must do to save his people and he suffers for it gladly to save them. He has honor, and a kind heart. He recognizes the fact Ryuu needs him as much as he needs Ryuu.
Over all this book is really well done.  I loved the whole politics of the planet. I liked getting to know Drakon and his people too. I would love to know more about them all in the future. This is one story I really couldn’t stop reading over and over again.