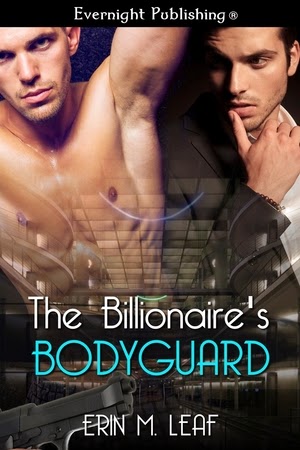 Jesse thinks protecting Alex will be a piece of cake. He’ll get to spend quality time with his oldest friend while avoiding his ex-girlfriend. Of course, nothing ever goes as planned. Why would Alex introduce him to everyone as his lover? And why didn’t Alex tell him about the threatening notes he’s been receiving for months?

Alex has been in love with Jesse for years, not that he’d ever admit it to his best friend, but he’s not above making a practical joke out of it. Telling everyone that Jesse is his boyfriend will go a long way toward relieving the stress of the threats he’s been plagued with recently. Unfortunately, when someone tries to shoot him at a charity gala, he discovers that maybe he needs Jesse’s skills more than he realized...

…because sometimes a billionaire’s best friend is the fake boyfriend who’s really his bodyguard.

Review
This is my first time reading author Erin M. Leaf and it will not be my last, The Billionaire’s Bodyguard had me from page one.  Ms. Leaf does a great job of bringing two best friends together and making me fall in love with their story.
Alex is the rich humble man who is openly bisexual.  He has a best friend Jesse.  Jesse is straight or so he thinks. Jesse comes to Alex when a girlfriend will not leave his apartment.  Alex opens his home to his best friend.
When someone threatens Alex’s life Jesse will do anything to save him. Even pretend to be his lover.  What starts out as a cover soon becomes reality.
I loved the connection these characters have.  The friendship transforming to more really was believable.  The cliché part of the straight friend finding out he is gay made me do that groan oh no thing, but Ms. Leaf really recovered from that with beautiful writing that kept me turning the pages.  When you want a beautiful love story between two unforgettable friends this is the book to pick up.